Status of ITS resources

Many contributors choose to make their gift more meaningful by honoring the memory of a loved one. Some make lasting tributes to their spouses, children, parents or friends by establishing funds to help K-State fight cancer far into the future. Here we share stories from some of our friends who've honored their loved ones with memorial funds. To learn more about establishing a memorial fund, please contact Shelley Carver at shelleyc@ksufoundation.org or 833-448-3578.

Sarah Young established this fund in 2016 in memory of her son Alexander Tzu-Jay Tung. She received her MS in statistics from Kansas State University in 1968 and her PhD later from University of Delaware. She is originally from Taiwan and recently retired from Pfizer in New York. Alex, who received his BS ('00), MS ('02) and PhD ('10) degrees in electrical engineering from Stanford University, was only 31 years old when he passed away March 24, 2010, after three years of battling embryonal rhabdomyosarcoma.

Alex was an accomplished artist, educator, writer and engineer. His work in diverse fields from product design to medical device technologies was motivated by the goal of improving people’s lives. His PhD research centered on medical technologies to deliver minimally-invasive treatments, allowing great reductions in patient trauma and recovery times, and improved accessibility of procedures. His high standards, strong ethics. and perseverance, exhibited in his early years by achieving Eagle Scout and receiving numerous school awards, continued to develop throughout his life.

Alex was a leader of many of Stanford's science outreach programs to spark children's interest in science. He worked with the Haas Center for Public Service and helped establish Stanford's Office of Engineering and Public Service, with the goal of integrating public service into university courses. Alex also helped create a course that explored issues surrounding the design, development and use of technology that benefits people with disabilities. 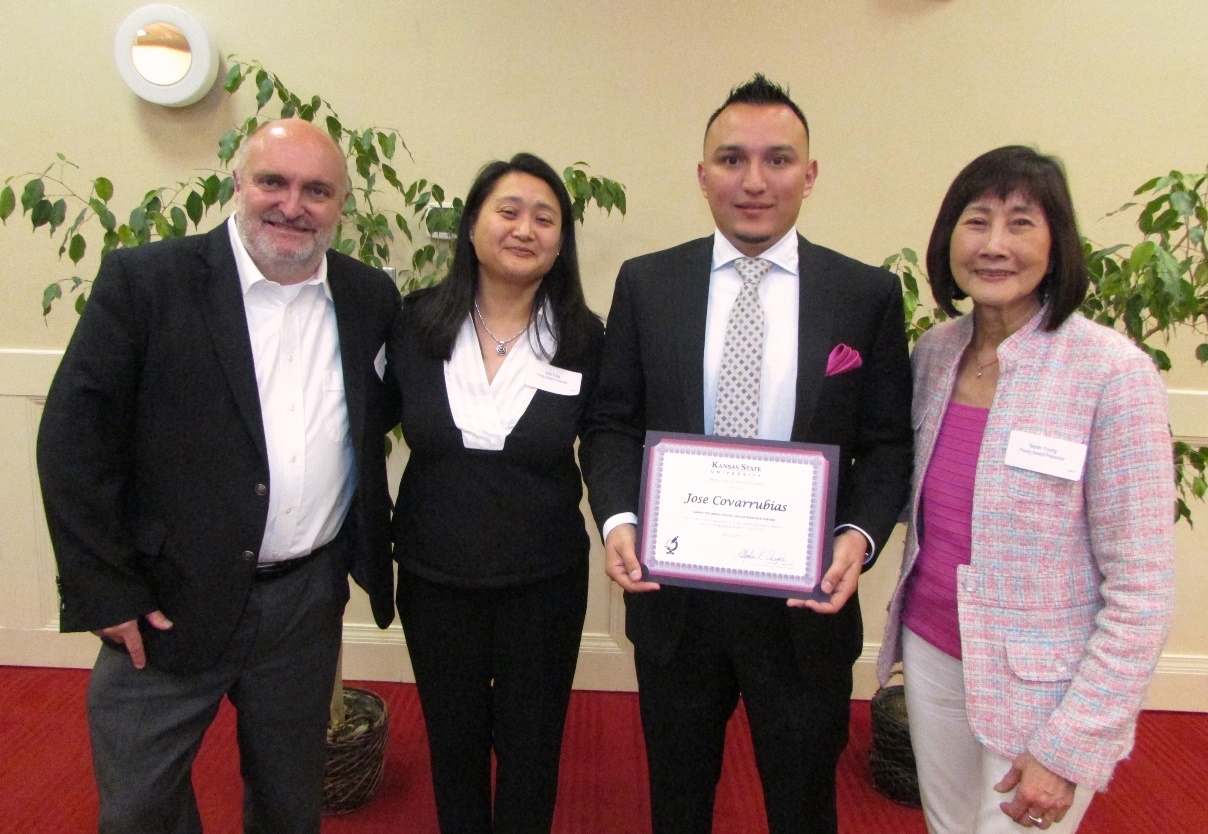 In his free time, Alex enjoyed music, photography, rock climbing, skiing, hiking and spending time with friends and family. He is deeply missed by family, friends and colleagues, whom he touched with his thoughtfulness and wit.

The first Sarah Young and Alex Tung Cancer Research Award was presented by Sarah (far right) and her daughter Julia Tung (second from left) to Jose Covarrubias (third from left), senior in chemistry, in spring 2017, for his research project with Dr. Stefan Bossmann (left). A recipient of several research-related awards, Jose will start K-State Graduate School in fall 2017.

To support this fund, make your online gift here and note that it's in memory of Alexander Tung (Fund Q97275).

Les and Sandy Regier lost their son Rob, a 1988 K-State graduate in pre-dentistry, to cancer in 1992. After that, they wanted to raise money for cancer research, and as K-State alumni, they knew the Johnson Cancer Research Center was the perfect fit.

They and their other son and Rob's twin brother, Randy, started the Rob Regier Memorial Golf Tournament in 1998 to raise funds for the center in memory of Rob.

"The tournament was the personal connection we were looking for," Les said. "To have an opportunity to raise money in 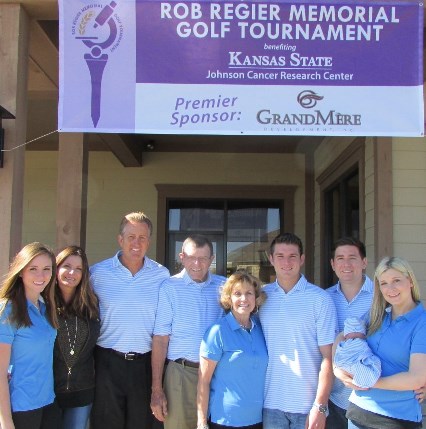 honor of our son, and knowing that all of that money goes back to K-State for cancer research and scholarships, is a wonderful feeling."

The tournament has raised $320,000 over the years, thanks to many generous supporters and sponsors, including premier sponsor of many years Grand Mère Development, owned by Mary Vanier.

Sadly, on Feb. 10, 2018, Les Regier also passed away. The 21st annual tournament will be hosted by Sandy and Randy Oct. 12, 2018, and dedicated in loving memory of Les. Learn more about the Rob Regier Memorial Golf Tournament.

To support this fund, make your online gift here and note that it's in memory of Rob Regier (Fund F84829). 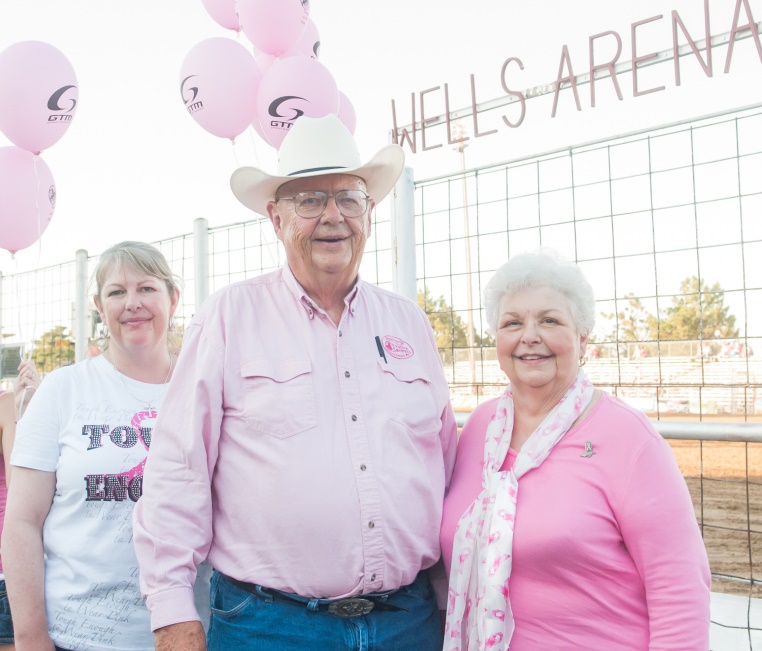 Dr. Gene & Sue Klingler lost their 4-year-old son Eugene "Bert" Klingler in 1965. As a surgeon, Gene had seen numerous cancer patients. But now his own little boy had an ependymoma, a cancer usually starting at the base of the brain.

He was a typical 4-year-old," Gene said. "He was very bright and inquisitive and he loved the outdoors. There's not a day that goes by that I don't think about the little guy."

Gene, Sue and their daughter Becky, also a physician, relied on their faith and support from family, friends and hospital staff to help them through the grieving process. When the Johnson Cancer Research Center was founded, they established an endowed fund in Bert's memory because they saw the possibilities their support created, and they appreciated the center's multidisciplinary approach and involvement of undergraduates and "class-act scientists."

Their commitment to aid K-State cancer research is also evident in all the work they did for the Kaw Valley Rodeo Association's Tough Enough to Wear Pink efforts. For more than 10 years, Tough Enough to Wear Pink night at the rodeo has honored cancer survivors and raised awareness and funds for the Johnson Cancer Research Center. During the Klinglers' time at the helm, they wore pink as they inflated pink balloons, sold pink merchandise and cooked for cowboys. Thanks to them and other dedicated partners, $80,000 was raised during those years of Tough Enough to Wear Pink !

To support this fund, make your online gift here and note that it's in memory of Bert Klingler (Fund F75539). 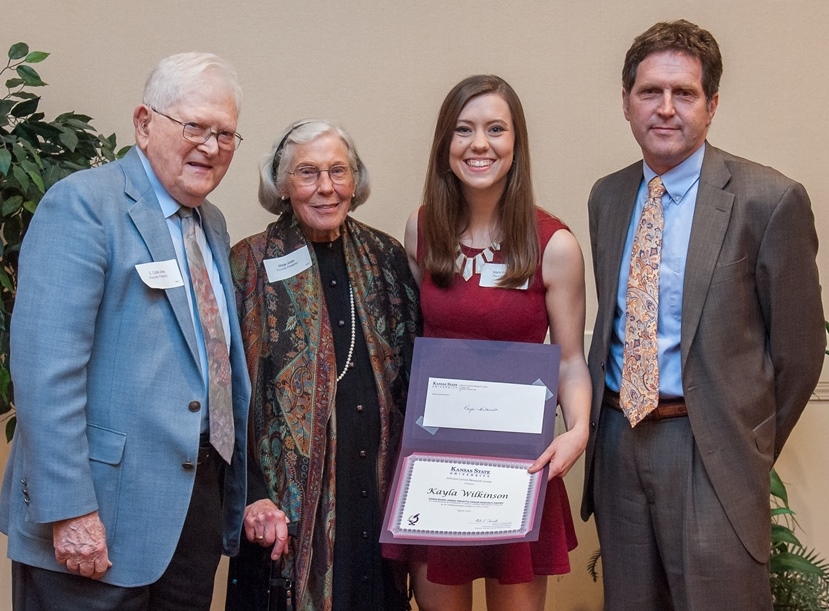 After his wife, Midge, a cancer survivor, passed away, C. Clyde Jones, K-State professor emeritus of management and former member of the Johnson Cancer Research Center's advisory council, chose to honor her memory and find joy in giving by establishing a scholarship in her honor. The Margaret "Midge" Jones Memorial Cancer Research Fund will support the faculty-led research training of undergraduate students.

This is Clyde's second endowed fund. He and Midge established the Karen Eileen (Jones) Prevette Memorial Cancer Fund in 2004 to honor their daughter Karen, who had passed away from cancer earlier that year. The fund also honors Midge's brother John Moren Scheldrup and Clyde's sister Eileen Jones Luck, both of whom passed away from cancer. Ten students had benefited from this fund as of spring 2017.

Clyde also works to raise funds for Shepherd's Crossing, a ministry that offers budget counseling, referrals and financial support to area residents. He has helped increase their donations from $100,000 to more than $400,000. 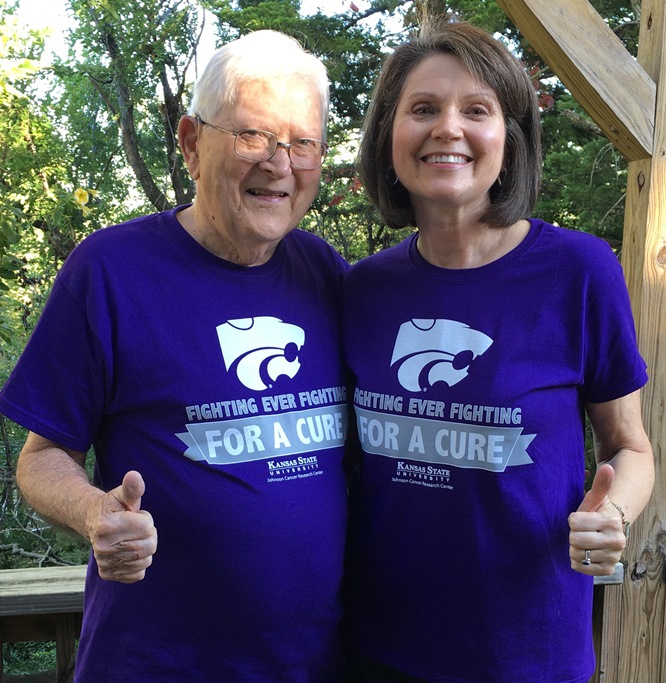 "Not-for-profit management and scholarships have become fitting ways [for me] to serve others." Clyde says. "The satisfaction I get from knowing that people are benefiting from what I've done gives me the good feelings I need."

Midge, who passed away May 1, 2016, also volunteered with several organizations and was known for wanting to improve others' lives. Clyde hopes the scholarship reminds people to appreciate her qualities.

"She was one of the most kind and loving people I've ever known," Clyde said. "She had an outward-giving spirit, and the cancer scholarship really fosters that."

The Jones family's legacy will help many outstanding K-State students, who will in turn serve society as researchers, doctors, nurses and more.

To support this fund, make your online gift here and note that it's in memory of either Midge Jones (Fund F73319) or Karen Jones Prevette (Fund F84344). 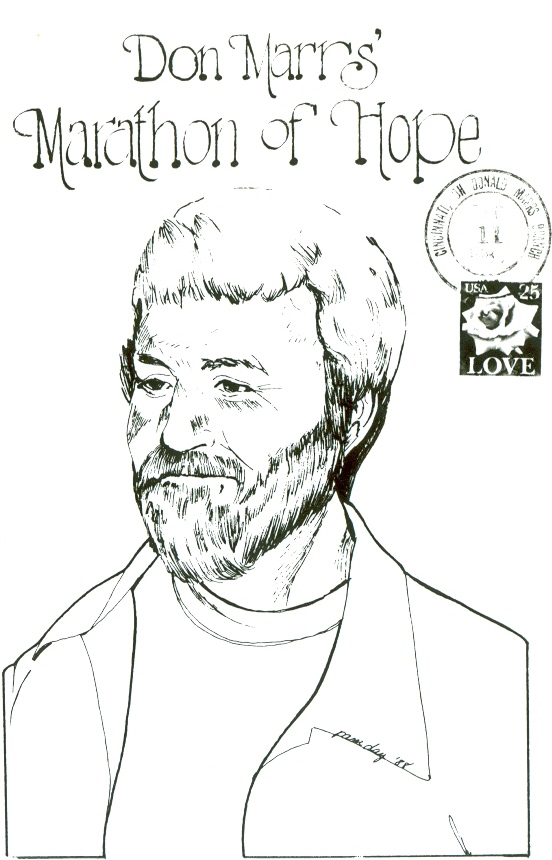 In 1980, letter carrier Don Marrs gave new meaning to the USPS mission of delivering precious information and sentiments. After being diagnosed with lymphatic cancer, he took time off from walking the neighborhoods of Cincinnati to instead walk across the United States and communicate the importance of cancer research.

Marrs set out on his Marathon of Hope in May, to carry a flame of hope for cancer victims like himself and demonstrate the need for intensified cancer research. The cross-country trek was inspired by fellow cancer victim Terry Fox, a Canadian whose own marathon was cut short when he died before reaching his destination.

After his 97-day, 2,200-mile marathon, Marrs kept making public appearances, even while being treated, to raise awareness and money for cancer research. He died seven years later, July 16, 1987.

He was so admired by his USPS colleagues that on Sept. 11, 1988, a Cincinnati station was named in his honor.

Kansans admired Marrs as well. During Marrs' marathon, the Postmaster of Ottawa, Kansas, the late Dave McBride, met him on the highway and bought him dinner. McBride was so touched by Marrs’ heroism that he led the Kansas Postmasters in establishing the Don Marrs Cancer Research Fund at K-State.

For several years, events were held to support the fund, with Marrs as guest of honor whenever possible. The first Don Marrs Cancer Research Award was given in 1985. By fall 2018, around 50 students had benefited.

To support this fund, make your online gift here and note that it's in memory of Don Marrs/Kansas Postmasters (Fund 77925).